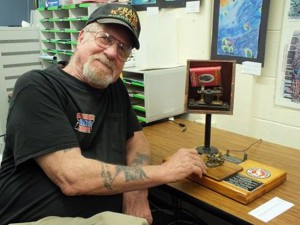 Frank was a very active member of the club who at different times took on the duties of President, Vice President, DX Committee Chairman, and Repeater Control Operator within the Snohomish County Hams Club. He attended and supported all Club events, demonstrating his skill in making contacts over the radio and coaxing others with less experience to improve their operating practices. The loss of Frank will leave a very big hole in the club family.

At 16 Frank received his first transmitter which launched his hobby interest as an Amateur Radio Operator.

Most of us knew Frank as K7GSE – “The Mighty Voice of Lake Stevens”.  Some of his older friends from childhood also say his call – K7GSE – also stood for the “Great Spinach Eater”.  Whether that was serious or in jest we’ll just leave to those who know and everyone else’s imagination.

To an outsider, Frank would likely be considered “odd.”  A confirmed bachelor who spent hours hunched over his radios into the wee hours of the night.  Face it; our hobby is full of “poster children” for the title of “odd.”

Thankfully most of us were insiders, and knew that Frank made “odd” not only so much more endearing, but a goal to be treasured, and sought after.

Frank was the quintessential bachelor.  The top ingredients in his kitchen were a coffee and a few snacks.  In fact, you couldn’t make a meal in his house to save your life – a fact much appreciated by the restaurant industry.  Frank’s every meal was at a restaurant.  He knew all the good ones, to the point where he had adopted family in all of them.  Frank likely helped many through the economic down-turn in the late 2000s, but got a little back every Veteran’s Day when he and others would partake of the free meals offered by local establishments to show their appreciation to those who had served.

You could always find him at one of his regular haunts such as Papa’s Mexican Grill, Contos, Ellie’s, Dave’s Famous BBQ in Everett, Noble Palace in Marysville, New Country Grill in LS, Senior California – only to name a few.

Everyone knew Frank, and Frank knew everyone.  Kids arrived at these places to learn at one of their first jobs, and left as young adults who still stayed in touch.  Anna, Brianna, Catherine, Sasha, Tony, Sergio, Stacey, Sarah, Lisa, Michelle (x?) – and I’m sure there are more we’ve missed.

Frank lived his life through his radio and through his friends.  Long-time friends Bob Castaneda and Bill Balzarini he knew since childhood.  Others like Jim Pratt he met later in life, and many of us here today are from the last 10-20 years.

Frank was very active in many ways.  He belonged to several amateur radio organizations, including the:

Frank was not just someone who went around and “joined” groups.  He participated, he contributed his time and spirit, he BELONGED.  He freely gave of his time to anyone who wanted it.

Frank’s major focus was DX – International (or distant) communications.  He “chased” countries, and had well over 310 of the possible 330+ that exist today.

Frank’s pride and joy was his radio station.  He didn’t live extravagantly, but he firmly believed in having a top-notch station, and had one of the best.  His equipment allowed him to pass communications in Haiti after their devastating earthquake in 2010, from 3,400 miles away.  Frank was one of the first to make contact with the new country of South Sudan – a whopping 8300 miles.  That one was an “inside job” though – his buddy Jim Pratt was on the other end of the radio, having been one of the first amateurs licensed in that new country at the time.

Many local operators would work long and hard at trying to bust a “pile-up” to contact a far distant station, only to have Frank boom over them and snag the contact with ease – a perfect 59.  You could hear his smile through the mic.  A smile of pride, but never arrogance.  He often followed it up by making sure the DX worked you after he was done with them.

Frank always shared his knowledge with anyone who was interested.  He always knew what countries were coming up that amateurs could contact, and could tell you almost by the hour what the radio propagation conditions were in the atmosphere.   (Frank called it “Prockigation”)  There were a number of other “Frankisms” that he used as well – “AWRL” instead of “ARRL”.  Some country names he referred to as though he were a native, and others you wondered if they were on the same planet.  These were all parts of Frank that we will treasure and remember.

Occasionally Frank would go on road trips with his sister Cheryl or one of his friends to somewhere typically in the Pacific Northwest.  For many years he joined his childhood friend Bob Castaneda and the club in Idaho for Field Day in June.   Even then he was never away from a radio, as he also had one setup in his car.

Frank was also a Telegrapher and railroad buff.  He amassed an impressive collection of telegraph and amateur radio keys and sounders that would rival that of most museums – in fact that is where his is going – to the Spark Museum in Bellingham.  Frank also volunteered up at Skykomish Railroad Museum as a railroad telegrapher on the weekends – talking to visitors and showing how it was done “in the old days.”  He had a full railroad telegrapher’s uniform and equipment, and was always happy to go share with others a walk back into history.

Frank lived his life as a shining example of the spirit within our Amateur Radio community.