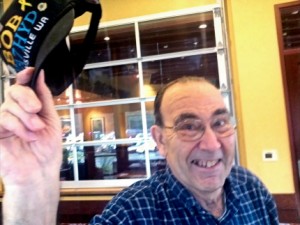 Bob had a unique talent and interest in radio and communication systems starting at a young age and continued throughout his life. He volunteered with the Ground Observer Corps, Civil Defense and Civil Air Patrol Cadets. He delivered The Herald newspaper (route 79) from 1953-1956, then moved to the old Herald mailroom (Colby Building) from 1956-1959 which led to a newspaper career as a Printer spanning another 40 plus years.

During junior high school he worked for the radio station KRKO and started drawing a salary in high school. He served two years active duty (1960-1962) in the US Navy aboard the USS Ranger (CVA-61) as an Air Traffic Control man.

He married his wife, Janet, August 23, 1963. He had an instant family of three stepchildren and embraced the roll of being a father to them. He moved the family to Marysville in 1971 and remained there until his passing.

His fascination with radio communications returned in 1964 when Citizen Band Radio License KLD-2044 was issued, and then again when his amateur radio license WA7HYD was issued in 1967. He made over 11,000 contacts while working all 50 states, plus numerous counties and states via amateur satellites, this made for one of his most interesting parts of his life.

There was always a 30-cup coffee pot brewing for all the ham radio guys that would stop by to chat. He communicated with people all over the world. He was a proud member of the Cascade Radio club. He also had mom involved in ham radio, N7BVQ for many years.

He was very proud of his service as a Reserve Sheriff Deputy of Snohomish County in the 1970’s.

Bob was also very proud of his Swedish heritage and spent countless hours researching and documenting his family genealogy.