Each year the Nominating Committee chooses a club member to be Ham of the Year. The committee solicits input from all club members about contributions made to the club and the hobby throughout the year. The announcement and awarding of the trophy takes place at the first (January) General Membership meeting of the following year. 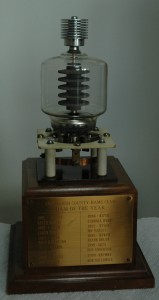 SCHC “Ham of the Year” Award

It all started in 1990 when club member Dave Robertson (WK7A) felt the club needed some kind of trophy that could be passed from year to year to a member who did wonderful things for Ham Radio and the community.

Dave, being an electrical engineer who worked at the Jim Creek Radio station, acquired an electrical tube that had one pin missing  Carroll Hyde (KI7YG) used his woodworking skills to craft a base on which to mount the tube.  They called it the “Ham of the Year” trophy.  Carrol also built a carrying case to protect the trophy while it was transported between winners. 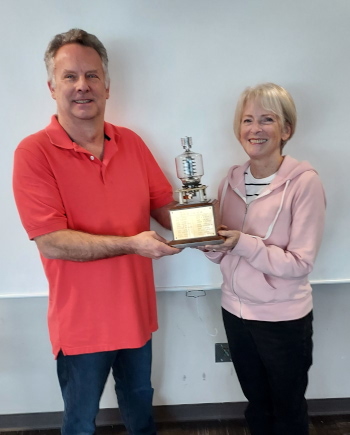 Tim Kephart, Kj7AKV receiving the Ham of the Year award for 2021 from President Kerry Burnettte KC7YL.

We thank the below honorees for their selfless service to Amateur Radio and to the Snohomish County Hams Club!